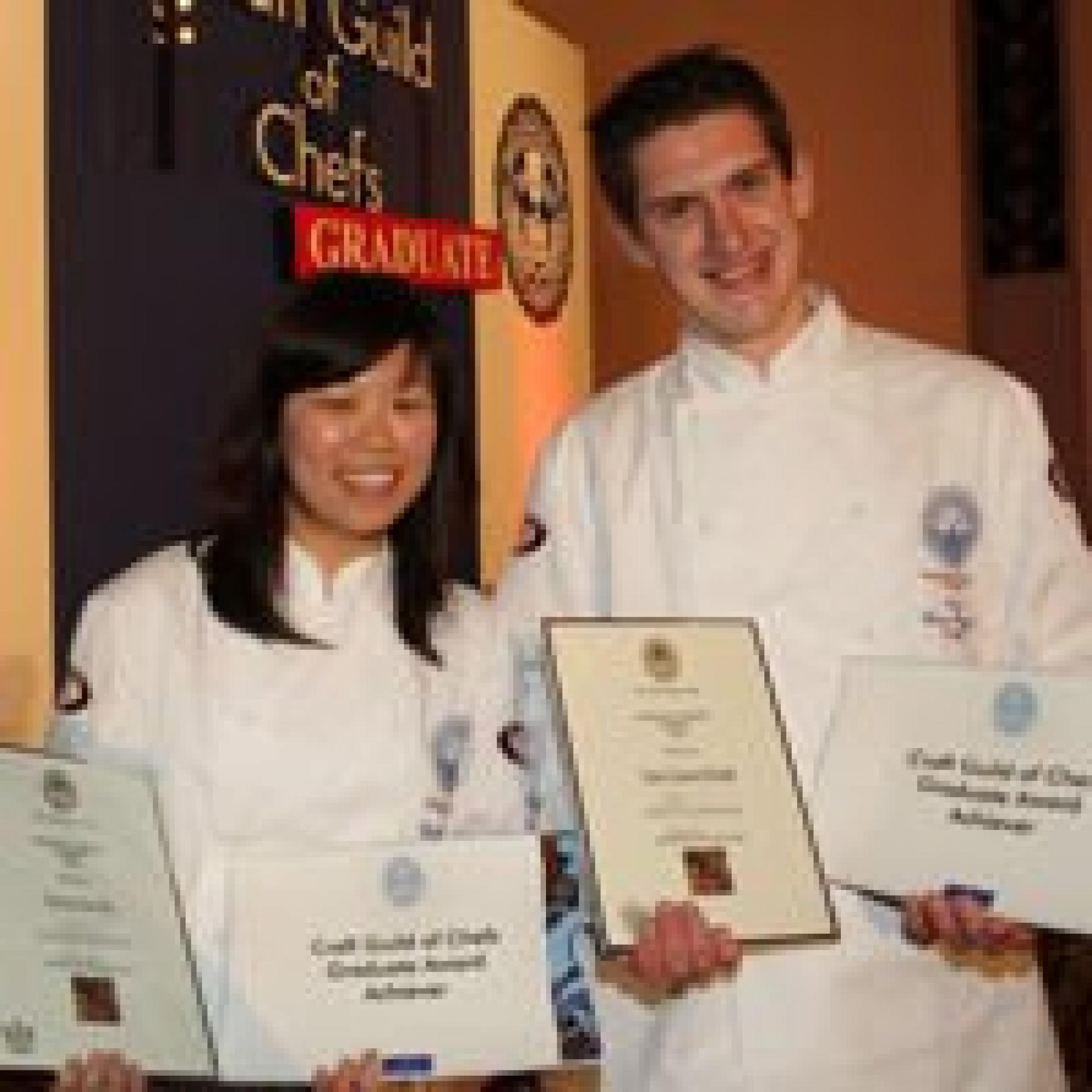 The Craft Guild reveal their graduates for 2009

Written by: Admin
A student from Thames Valley University and a demi-chef de partie from Oxford's Le Manoir aux Quat'Saisons have become this year's Craft Guild of Chefs graduates.
Hyun You Im (Honey) and Daniel Inniss-Fitzhugh received the news in front of 200 industry colleagues at the Craft Guild of Chefs' Graduate Awards at the Sheraton Hotel, Park Lane (Monday 7th).As graduates, the students not only gain new skills and an industry-recognised achievement on their CV, but a host of prizes including study tours to Luxembourg (Villeroy & Boch) and a Scottish fish farm (James Knight of Mayfair).To earn a place the pair had to score higher than 85% in a final cooking exam at Westminster Kingsway College last Friday, judged by a panel of top chefs. Daniel was the highest achiever with 87%, scoring one point more than Honey.Honey, mentored by Michael Coaker, and Daniel, mentored by Gary Jones, were amongst eight under 23-year-olds to take the test.Craft Guild of Chefs vice president and organiser Steve Munkley said standards were rising every year and both new graduates should be extremely proud. "The quality of Dan's main dish using a mystery basket, in particular, was fantastic. He cooked wild sea bass with a butternut squash puree to absolute perfection, showing great understanding and taking a lot of time to make sure everything was hot and tasted good.Daniel Inniss-Fitzhugh's winning dish"Honey's highlight had to be her banana flan and she ran away with the marks, scoring 29 out of 30 for her final dish. The panel's pastry expert Matt Owens was particularly impressed with the taste and texture, hence the outstanding mark."Craft Guild mentors Lisa Sutherland from The Sheraton Park Lane, London, and Dez Turland at Royal Duchy Hotel, Falmouth, Cornwall, also picked up an award for excellence and training.This year's Graduate Awards were sponsored by Bel Foodservice, CCS, James Knight of Mayfair, Johnson Diversey, Justerini & Brooks, Pommery Champagne, Reynolds, Royal Garden Hotel, Savoy Educational Trust, The London Meat Co, The Sheraton Park Lane, Villeroy & Boch and Worshipfull Company of Cooks.