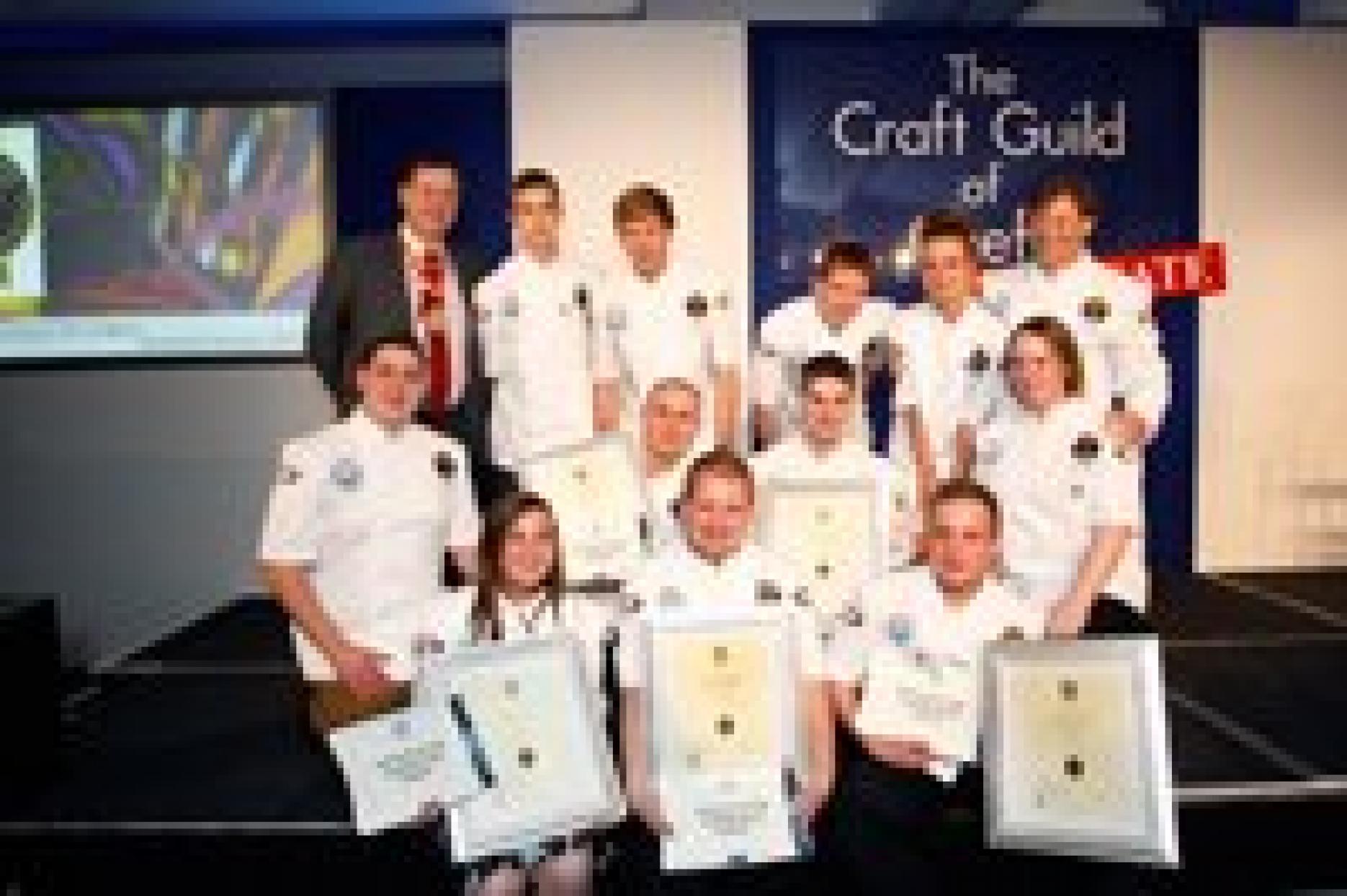 Written by: Admin
The names of five young chefs who passed the rigorous examinations of the Craft Guild of Chefs annual Graduate Awards examinations to become graduates, were announced at a special 10th anniversary awards lunch at the Royal Garden Hotel in London yesterday (September 18).
Coming through with flying colours this year were: Rebecca Reeves from the House of Commons, Ben Champkin from The Elephant Restaurant in Torquay, Kristian Curtis from Simpsons Restaurant in Birmingham, James Goodyear from Le Manoir Aux Quat' Saisons in Oxfordshire and Brian James from Bluebells Restaurant in Sunningdale, Berkshire.To become a graduate an 85% pass mark was the goal and all scored highly, however Goodyear was the highest achiever with a score of 89%.Craft Guild vice president Steve Munkley, who pioneered the launch of the examinations in 2003, said the standard at this year's final exam at University of West London (formerly Thames Valley University) on September 6 was exceptionally good across the board, but some skills demonstrated were particularly impressive."The fishmongery, for which we supplied each candidate with a 2kg sea bass and a mystery basket to create a main course for four, was excellent this year, with two of the candidates awarded full marks, something we've never seen before in a skills test," he said. "The examiners couldn't find anything to fault. They demonstrated their skills perfectly, from the cooking degree of the fish to bringing out the tastes and flavours."To test the candidates' butchery skills, we gave them a rack of lamb and a recipe to create a classical dish of Lamb Cutlets with Reform Sauce. Some of them scored as high as 90% in this."Overall, each finalist was enthusiastic, focused, and I'd say that the ones who didn't pass will be back as they weren't very far off the mark at all. It was a learning curve and they just need to hone a couple of skills, helped by a feedback report from the judging panel."Regarding the highest achiever, Munkley said Goodyear was consistent all the way through. "He got his head down and grafted throughout the three hour practical exam, working as a consummate professional, with the work ethic of a seasoned chef," he said. "Definitely one to watch out for."The Graduate Awards take what chefs under the age of 23 have learnt at college and started to hone in the workplace to the next level," he added. "They have earned respect and recognition over the years, with top chefs including the likes of Raymond Blanc acknowledging what they stand for and graduates taking a pride in mentioning their award in CVs and biographies."Nick Sinclair, executive chef at the four star Brooklands Hotel in Weybridge, Surrey, spoke at the awards lunch about how the awards had shaped his future. He also scooped the employers' trophy for excellence in training for his support and mentoring of his young chef Harry Peak.Prizes for the successful graduates included a study tour to Luxembourg with Villeroy & Boch to visit its factory and see how its tableware is made plus a taste of the country's cuisine, and also a fishing trip courtesy of James Knight of Mayfair to learn more about sustainable fishing.As the highest achiever Goodyear received an additional prize, courtesy of Warner Hotels (Bourne Leisure Group), of a four-day break for two to take any time during the next year.To celebrate the 10th anniversary, the menu for the awards lunch was created by six former Craft Guild graduates.Munkley, executive chef at the Royal Garden Hotel, said he is now keen to hear from other young chefs under the age of 23 who wanted to push boundaries in the 2013 Graduate Awards exams.The 2012 finalists were:Ben Champkin, The Elephant RestaurantKristian Curtis, Simpsons RestaurantEthan Flack, Le Manoir Aux Quat' SaisonsJames Goodyear, Le Manoir Aux Quat' SaisonsLiam Griggs, The Royal HouseholdBrian James, Bluebells RestaurantJordan Kerridge, Westminster Kingsway CollegeBen Murphy, Koffmann's at the Berkeley HotelHarry Peak, Brooklands HotelRebecca Reeves, House of CommonsLouise Roberts, Lexington CateringClaire Willett, The Waterfront Restaurant, Wyboston LakesSponsors for 2012 were: AAK Foodservice, CCS, James Knight of Mayfair, Justerini & Brooks, Meiko, Pommery, Reynolds, Robert Welch Knives, Royal Garden Hotel, Savoy Educational Trust, The London Meat Company, Villeroy & Boch, Warner Hotels (Bourne Leisure Group), Wenlock Springs and Worshipful Company of Cooks.