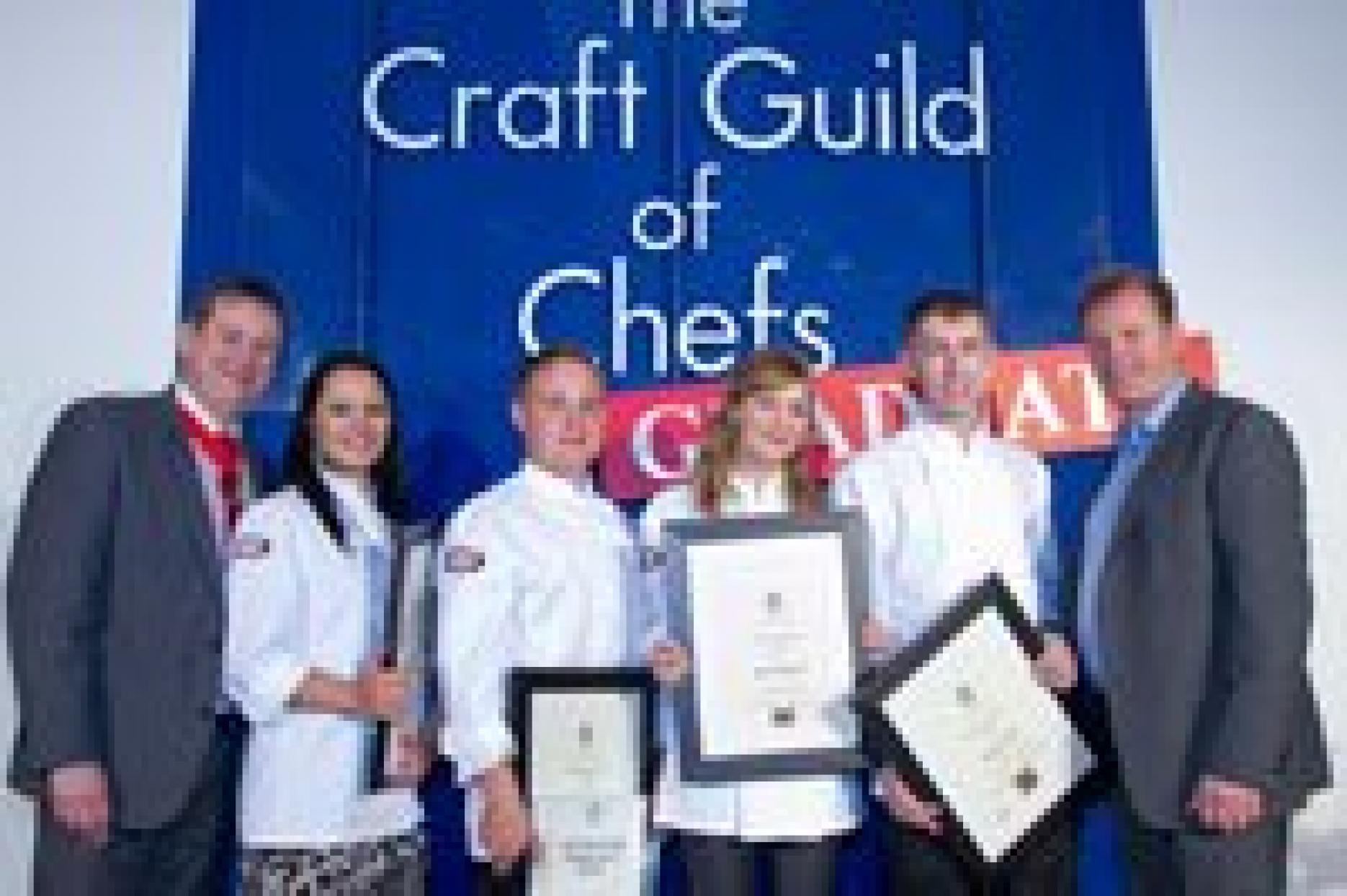 Written by: Admin
Four young chefs made the grade and achieved the all important marks in the Craft Guild of Chefs annual Graduate Awards examinations to become graduates.
They were: Daniel Beech, chef de partie at Simon Radley@The Chester Grosvenor & Spa; Rosa Fothergill, chef de partie at the Rhinefield House Hotel, Brockenhurst; Chris Munroe, chef de partie at the Royal Garden Hotel; and Rositsa Nikolova, commis chef at the House of Commons. Three of them reached the 85% pass mark, while Nikolova became the highest achiever with an amazing 87% score.Now in its ninth year, the exams put working chefs up to the age of 23 through their paces. This year 26 chefs took part in the regional heats at University College Birmingham and the University of West London – the highest ever number of entrants, and this was whittled down to the 10 finalists who were honoured at a special awards lunch held at the Royal Garden Hotel in London on September 6.In the finals five days earlier at Westminster Kingsway College in London, they had to take a theory exam to determine their knowledge about food and a practical exam to test their skills in butchery and fishmongery. They then had to produce a fish dish from a mystery basket, a classic meat dish – pan seared rib eye steak with sauce béarnaise, game chips, grilled tomato and fresh watercress, and a classic dessert – fresh fruit savarin with chantilly cream.The 2011 graduates won a study tour to Luxembourg with Villeroy & Boch to visit its factory and see how its prestigious tableware is made plus a taste of the country's cuisine, and also a fishing trip courtesy of James Knight of Mayfair to learn more about sustainable fishing.As the highest achiever Nikolova received an additional prize of an exclusive UK break for two courtesy of Warner Leisure Hotels & Coastal Villages to take any time during the next year.All the finalists were awarded a year's membership of the Craft Guild, a personalised chef's jacket, a bottle of Pommery champagne, and a knife from Robert Welch Designs. They also received a £100 voucher from Chris Galvin, chef patron of Galvin Restaurants, to enjoy a meal at Galvin Bistrot that he would cook for them.This year the employers' trophy for excellence in training, which goes to the person who has mentored and supported their chef during the training for the exams, went to Fergus Martin, executive chef of Wyboston Lakes in Bedfordshire, who mentored Claire Willett.Galvin, who once again headed the judging panel, said that everyone in the final was a winner. Commenting on the new graduates he said: "To get that percentage required is a very special milestone in your life going forward."Vice president of the Craft Guild of Chefs and awards organiser Steve Munkley said all the new graduates should be delighted and proud of their achievements."The final was certainly a reflection of the all the hard work and effort that these young chefs have put in. The Graduate Awards say yes, I'm making great strides up the career ladder. These young chefs have now been verified by the best chefs in the industry, and what a cracking endorsement that is to have on your CV."The Graduate Award 2011 finalistsSteve Allery, commis chef, The Dorchester CollectionDaniel Beech, chef de partie, Simon Radley@The Chester Grosvenor & SpaWilliam Chilila, pastry demi chef de partie, D&D, LondonRosa Fothergill, chef de partie, Rhinefield House Hotel, BrockenhurstIan Malcolm, lead chef, M&S Deli, Co AntrimChris Munroe, chef de partie, The Royal Garden Hotel, LondonRositsa Nikolova, commis chef, House of Commons, LondonPhil Steggall, chef de partie, The Royal Garden Hotel, LondonMichael Tweedie, chef de partie, Lucknam Park, WiltshireClaire Willett, commis chef, Wyboston Lakes, BedfordshireWords: Sheila Eggleston